Volume 4: The Right to Compensation for Victims of Internal Armed Conflicts in East Africa. A Case Study of Genocide Victims in Rwanda

Volume 2: The United Republic of Tanzania in the East African Community. Legal Challenges in Integrating Zanzibar

Volume 1: Protection of Consumers and a Guard against Counterfeit and Substandard Pharmaceuticals in Tanzania. Examining National, Regional and International Legal and Institutional Frameworks

The TGCL Research Series is based on the outcome of research undertaken mainly by TGCL PhD students. Series Editors: Gordon R. Woodman (until 2017), Richard Frimpong Oppong (since 2018), Ulrike Wanitzek, Benedict T. Mapunda and Johannes Döveling. The books may be ordered through the TGCL office in Dar es Salaam. Volumes 1-4 may be ordered through Rüdiger Köppe Verlag, Cologne. 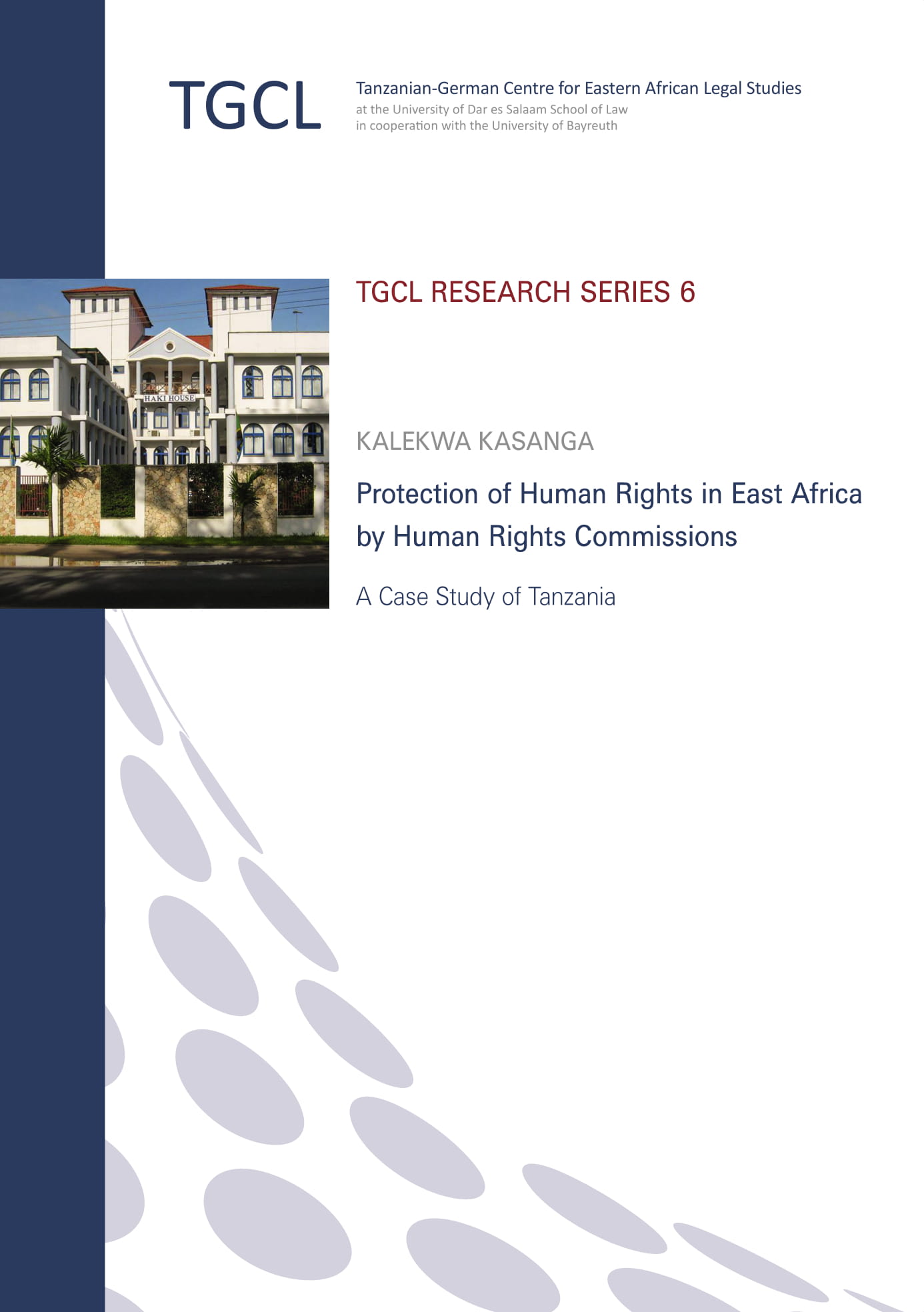 National Human Rights Institutions (NHRIs) play an important role in protecting human rights at national, sub-regional, regional and international levels. In this book, Kalekwa Kasanga analyses the role of East African NHRIs in protecting human rights in their respective countries, with specific reference to the Commission for Human Rights and Good Governance (CHRAGG) in Tanzania. This study focuses on the implementation of the recommendations issued by CHRAGG in protecting human rights in Tanzania. The author contends that the existing legal and institutional framework is feeble and does not facilitate implementation of the recommendations issued by CHRAGG. For example, there are no regulations to guide the enforcement of recommendations issued in respect of complaints received and negotiation of the amount of compensation to victims of human rights violations.
The author also discusses other challenges, such as political will, funding, awareness of human rights issues, delays in implementing recommendations issued by CHRAGG on received complaints and lack of cooperation by other institutions. Several proposals are advanced for improving the current legal and institutional framework under which CHRAGG functions and expediting the implementation of its recommendations. This book is a significant contribution in the area of human rights law,and may be used as a reference by students, non-governmental organisations, law reformers and academic researchers. 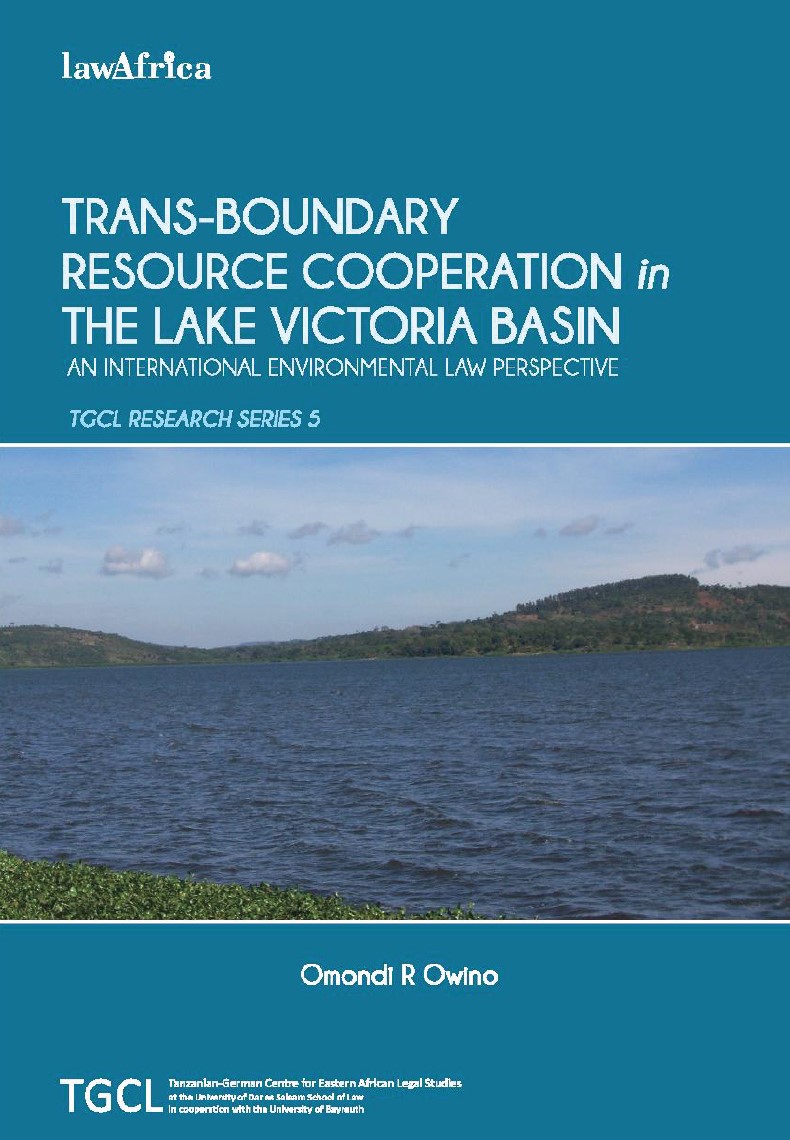 Volume 4 (2014): The Right to Compensation for Victims of Internal Armed Conflicts in East Africa. A Case Study of Genocide Victims in Rwanda 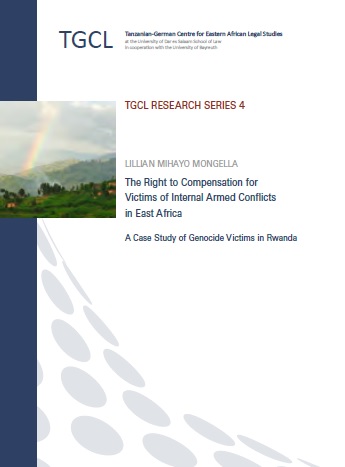 Compensation to victims of conflict is vital in any post-conflict society passing through a period of transitional justice. This is one of the forms of reparation that endeavour to acknowledge the suffering endured by victims during armed conflict. In this work Lillian Mihayo Mongella explores the right that victims of armed conflict possess, or ought to possess, to be compensated for the harm they have suffered. Her study centres on the internal armed conflicts that have occurred within the East African States, particularly the 1994 genocide in Rwanda. The legal and administrative mechanisms currently in place and the challenges faced in this field by both victims and governments in this region are examined.

The author contends that, in order to ensure payment of compensation to victims, proper laws and policies need to be firmly instituted. In Rwanda, for instance, genocide victims are yet to obtain compensation because of the lack of proper laws and policies to facilitate the process. The country has been struggling since 2001 to put in place a specific law to govern the compensation process. The 1996 Organic Law which accorded an opportunity to victims to claim compensation in courts of law has been technically rendered ineffective by the law establishing the Genocide Survivors’ Fund, which reserves to the Fund the power to sue the perpetrators. The author has also addressed other challenges, such as the difficulties encountered in identifying victims and the inadequacy of resources. A number of recommendations are put forward for legal and policy reforms at international, regional and national levels which would enable the existing impediments in compensating victims of internal armed conflicts to be tackled. This study is thus relevant and useful in the areas of international humanitarian law, international criminal law, international human rights law, and transitional justice in general. It will be useful also to scholars, law makers and policy makers in the area of victimology. 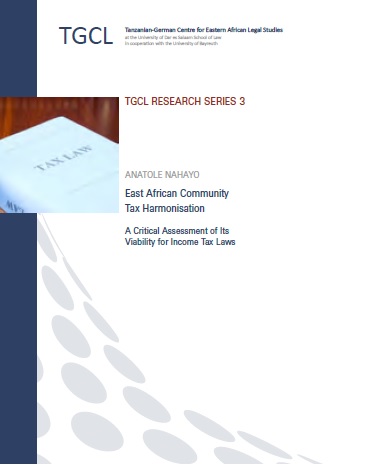 No well informed person questions the instrumentality of tax harmonisation to successful regional economic integration. It is with this understanding that Burundi, Kenya, Rwanda, Tanzania and Uganda have set the harmonisation of their tax policies and laws as one of the goals of the East African Community that they form. However, it is also accepted that it is easier to set tax harmonisation as a goal than to implement it, particularly when domestic income tax laws are involved.

This work critically scrutinises the income tax laws of the Partner States of the East African Community, with a view to assessing their convergence, their divergence, their compatibility with the principles formulated to achieve the goal of integration, and above all their amenability to the harmonisation effort. The objective, on the one hand, is to critically assess whether tax integration is a viable option, and, on the other hand, to explore whether it is feasible to stretch the effort even further and establish a single unified income tax system within the Community.

The research findings warn of the real danger posed by the continuing wide disparities in economic levels, economic endowments and other factors, which still lead the Partner States to focus more on municipal objectives than the professed objective of integration.

The study does not show this last objective to be impossible of attainment; rather, it identifies the obstacles which need to be surmounted if success is to be achieved. It recommends a re-examination of current approaches in order to avoid the challenges that have persistently dogged multilateral arrangements on taxation. It argues that the Community cannot bring about a multilateral tax regime through bilateral mechanisms. The premonition from the very beginning of the research was that to talk of harmonisation of income tax systems within the Community, instead of unification of the systems, spelt doom. In this context, therefore, this study is not only cautionary, but also rescue-based.

Volume 2 (2014): The United Republic of Tanzania in the East African Community. Legal Challenges in Integrating Zanzibar 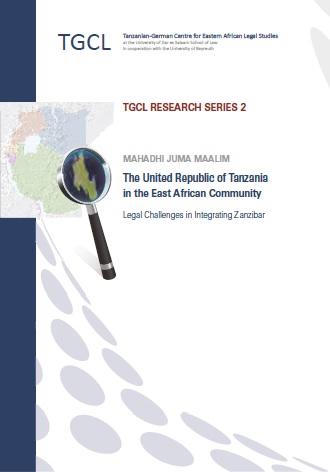 Regional integration requires the ceding or pooling of some elements of sovereignty by member states to enable regional organs and institutions to implement the objectives for which such institutions are created. In the case of Tanzania’s participation in the East African Community (EAC), this involves the ceding of sovereignty over certain matters which only one part of Tanzania – Zanzibar – has jurisdiction over.

In this study, Mahadhi Juma Maalim explores how the unique Union of Tanzania, which has a two-government structure and provides for Zanzibar’s exclusive jurisdiction on non-union matters, poses legal and political challenges with respect to integrating Zanzibar in the EAC and the implementation of EAC commitments.

The author asserts that the integration of Zanzibar in the EAC raises legal and constitutional challenges because the EAC covers many matters which are within the “exclusive jurisdiction” of Zanzibar. Zanzibar, on the other hand, although an autonomous entity within Tanzania, cannot participate directly in the EAC since it is not a sovereign State.

A critical analysis of the position and extent of the autonomy of Zanzibar within the Tanzanian constitutional set-up and in the EAC reveals serious challenges facing the integration of Zanzibar into the EAC in relation to Zanzibar’s non-union matters. The Tanzania (Union) Government has neither the authority to commit Zanzibar to the EAC nor any mandate to change the laws and administrative arrangements existing in Zanzibar to make them EAC compliant. The study recommends some special arrangements that need to be adopted if Zanzibar is to be fully integrated into the EAC.

Volume 1 (2013): Protection of Consumers and a Guard against Counterfeit and Substandard Pharmaceuticals in Tanzania. Examining National, Regional and International Legal and Institutional Frameworks 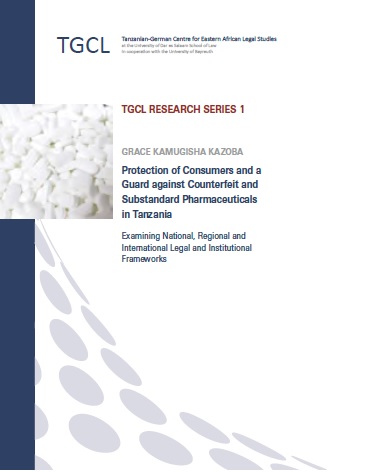 This book brings together underlying legal theories of intellectual property, consumer protection, international trade and human rights laws to critically look at the role of law in protecting consumers. While the book uses the prevalence of counterfeit and substandard pharmaceuticals in Tanzania as a tool of analysis, it covers areas such as access to affordable quality, efficacious and safe medicines; the right to an effective remedy for those injured through the use of ‘wrong’ medicines; the right to information enabling a consumer to make an informed choice of medicine; and the right of consumers to know how their health is governed.

In this book Grace Kamugisha Kazoba explores the traditional legal theories underpinning consumer protection under common law such as manufacturer liability, product liability, contracts for sale of goods as well as criminal law, and observes that such legal theories are insufficient in protecting consumers against counterfeit and substandard medicines, and hence consumer rights to health and life. It is also noted that theories of intellectual property law at international, regional and national levels as well as those of international trade law, especially at regional revels (including East Africa) and in Tanzania, do not sufficiently promote consumers’ access to quality, efficacious and safe drugs.

Thus the book recommends that the issues elevated should be addressed through a human rights based approach including human rights law. This book is of importance to law students, legal practitioners, policy makers and officials of regulatory institutions as well as anybody interested in consumer protection generally.